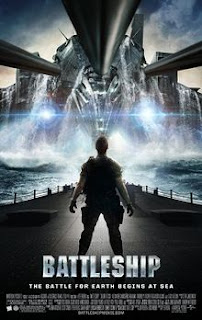 In 2005, NASA discovers an extrasolar planet, which they name Planet-G, with conditions similar to Earth. In 2006, they transmit a powerful signal from a communications array in Hawaii. Meanwhile slacker Alex Hopper gets arrested while attempting to impress Sam Shane, daughter of U.S. Pacific Fleet commander Admiral Terrance Shane. Stone Hopper, Alex's older brother and a naval officer, is infuriated at Alex's lack of motivation and forces him to join him in the U.S. Navy.

By the present day, Alex is a hothead lieutenant aboard the Arleigh Burke class destroyer USS John Paul Jones, while Stone is a commander and the commanding officer of USS Sampson. Alex is in a relationship with Sam and is in danger of being discharged from the Navy. Their ships join the Rim of the Pacific Exercise (RIMPAC) in Hawaii.

During the exercises five alien spacecraft arrive in response to the NASA signal. Their communications ship crashes in Hong Kong, causing heavy damage and casualties there, while four others land in the water near Hawaii. Sampson, John Paul Jones, and the JMSDF Kongō class destroyer Myōkō investigate. Alex, Raikes and Beast are sent to investigate, but when Alex approaches, the alien mothership reacts and creates a force field that traps the three warships. The Navy issues a blast from a fog horn, which is answered in kind by a sonic blast from one of the alien ships. The Navy opens fire on the alien fleet, which then reevaluates the Earth ships friend or foe status, changing the monitor color for the Navy ships from green to red. The aliens destroy the Sampson and Myōkō, and damage John Paul Jones, killing the commanding and executive officers. Alex sees his brother die and returns to his ship, where he is forced to take command, albeit reluctantly and to the disbelief of the crew, as the most senior officer left on the ship. Enraged, he orders an attack, but Beast manages to convince him to recover the survivors from Myōkō, including Captain Nagata, with whom Alex is in a rivalry. The alien ships sends weapons to the islands, that destroy the military equipment and island infrastructure, but leaves noncombatants alive.

Meanwhile in Oahu, Sam, a physical therapist, is accompanying retired U.S. Army veteran and double amputee Mick Canales, on a hike to help him adapt to his prosthetic legs. At the sea, they capture an humanoid alien, which attacks Alex before being rescued. Another alien infiltrates the ship, but they manage to blast him off. Sam and Mick run into scientist Cal Zapata, who informs them that the aliens are using the communications array to signal back to their home planet.

Back on the John Paul Jones, thanks to the briefly captured alien, the humans learn that the aliens are sensitive to sunlight, but they face difficulty because the alien force field has disabled radar functions. Nagata suggests using NOAA's tsunami warning buoys around Hawaii to track the aliens as he has been using it to track other countries ships for every RIMPAC game. Mick forces Zapata to retrieve a spectrum analyser that allows Sam and Mick to contact the John Paul Jones and relay this information that the communications satellite will be on position in four hours and the aliens will be able to contact their planet. During a night battle, the John Paul Jones sinks two alien ships, but is unable to hit the third. Alex decides to lure the third alien vessel close to shore at dawn, where he and Nagata shoot out its bridge windows as the sunrise blinds the aliens. John Paul Jones destroys the last alien escort vessel only to fall prey to their mothership's long range weapons.

Fearing the aliens are contacting a larger invasion fleet, Alex and the survivors of the John Paul Jones and Myōkō assume command of USS Missouri, a decommissioned battleship turned into a museum ship, and reactivate it with the aid of the retired veterans preserving her, but end up coming face to face with the alien mothership. In the ensuing battle, the Missouri severely damages the alien mothership, destroying its force field in process. Alex uses the last shell to destroy the communications array on the island, leaving the Missouri defenseless. With the force field down, Admiral Shane scrambles the fleet and F-18 fighters from the RIMPAC fleet arrive and save the crew by eliminating the alien threat.

A ceremony is held to honor the Navy personnel and Alex, who is promoted to lieutenant commander, is presented with a Silver Star and accepts Stone's posthumous Navy Cross. After the ceremony, Alex asks Admiral Shane for his daughter's hand in marriage. The admiral initially refuses but invites Alex to lunch to discuss the matter, referencing how Alex and Sam met.

A post-credits scene in Scotland shows three schoolchildren and a handyman running off in terror as an alien hand reaches out of an object they have just opened.