Injoy! Watching Free Movies
Description : This year’s Cinemalaya showcased different films that everyone will surely love. As for me, my film of choice was ANG BABAE SA SEPTIC TANK. Even before choosing, the title itself made me draw my attention on this movie. The title is catchy and when I saw the synopsis, I was enthralled. I wish to be a director someday. Seeing that the synopsis is a totally different story, I want to watch right away. It speaks about my dream, and on how would I get there. Plus, this was a comedy film so that is a double blessing to me. True enough, the film proved to me its brilliance. It was the first film I’ve watched who gave information inside film industry. It has a story, a theme and imbued in me some values which I often neglect, the value of being contented and thankful with what I have without giving up what I wanted to achieve. The language of the film is entirely different than others. For an average mind set of a person, no one would actually think that a depressing issue like that of the people living in slum areas and oftentimes force to give up on the uncertainties of life could be presented in a light way. I believe, from what I have seen, they’ve touched different realities on this movie. First is the reality of life projected in the life of Mila and her children. In a light manner as it could be, they tried to instil in us the reality that, this is life, outside your safe box, these people truly exits. And this scene is constantly repeating on the entire movie so that we will remember. Second, it speaks about the reality in media and film industry. Producing a film is never an easy feat. Every detail in a film must be intact, must be given enough attention. Considerations are always part of creating a big project, and by the means of consideration, I mean the choosy and inconsiderate mainstream lead. They also show the reality that, after achieving something, there are people, who thinks highly of themselves already, like that of the forever annoying director who cannot even straighten out his grammar. Not just that, it also shows a deep meaning on Jocelyn’s character, who did not speak on the entire film. Her character speaks for the marginalized people, for those who are not given the chance to rise out their voices. On the other side, she also speaks about the unspoken dreams of each person, on how most people behave upon reaching their dreams. Their dreams are serene, almost unheard, until, because of difficulties in life, forgotten. Keywords : Watch movie online | Watch Babae Sa Septik Tank 2011 online | Online movies | Movies free Babae Sa Septik Tank 2011 | Babae Sa Septik Tank 2011 online movie | Watch free movie online | Watch Babae Sa Septik Tank 2011 online movies | Free Tagalog Movie | Pinoy Movies | Asian Movies | Hollywood Movies | War Movies | Animated Movies | Bollywood Movies | Tagalog movie online | Watch free tagalog movie online Thanks for watching Babae Sa Septik Tank 2011 Full Movie 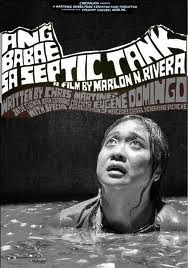